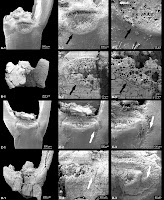 The recent paper in Science by Riehl et al. on  the evidence for Chogah Golan has rightly garnerd wide attention (e.g. Science news; commentary by Willcox). This is a highly significant paper, which shows that the beginnings of cultivation were indeed mutlicentric within the fertile ccrescent, and it suggests that there was an independent domestication process for emmer wheat in the eastern fertile crescent in addition to that in the western fertile crescent.

Are there surprises? Yes. The big surprise here is the emmer wheat domestication, as many have argued on biogeographical and modern genetic grounds that there should have been and eastern and western barley domestication, but this has been little considered for wheat. This is mainly because the modern distribution of wild wheats does not extend that far east and south, and thus the data from the Chogha Golan, especially the lower levels indicates that the distribution of wild wheats at the start of the Holocene/end of the Pleistocene was indeed different and more extensive than modern wild wheats. This further implies that some starts to cultivation and domestication events could have drawn on wild population that are extirpated today and therefore are not reflected in modern wild germplasm collections. Modern collection used in genetic studies are only a fragmentary representation of the past, although geneticists often fall into the trap of assuming that good wild sampling in the modern day means they have captured the wild diversity from which domestication began.

What this what we/ I suspected? Yes. I am one of a number of scholars who have been arguing for a multicentric process of parallel starts to cultivation and parallel, and protracted, domestication processes around the Fertile Crescent, i.e. De-centering the Fertile Crescent. Mostly we have argued this on contrasts between the Southwest and the north/central fertile crescent and the contrasts between morphological diversity in archaeological samples and that in modern germplasm. As the authors here note with their triticoids, they are dealing with a wild wheat type not well represented in modern collections; this is equally true of early domesticated wheats in Syria/Anatolia and even in Neolithic Europe. In the Neolithic there are extinct genetic lineages, that are morphologically distinct, that are not found in modern landraces. In other words there are several lost crops of early agriculture.

Were things really synchronous? This remains a little unclear. The lower levels seems to have pre-domestication cultivation of barley and lentil and lost wild wheat in the equivalent of PPNA/ EPPNB time periods-- this is indeed the same period that we see this in Jordan, Israel, north and south Syria. However in the Chogha Golan there is then a break and a large minority of domesticated type emmer appears. But this is mainly in the Late PPNB (ca. 7800 BC)! By this period domesticated crops are well established at higher frequencies (usually 60-70% non-shattering spikelet bases) in western fertile crescent assemblages (mainly of einkorn wheat or barley). Emmer at Tell Aswad in Syria is ~23% non-shattering at 8300 BC and at Tell el-Kherkh in NW Syria it is 44% at ca. 8400 BC. This evolution of non-shattering (a key domestication trait) appears  slightly ahead in the west. This could mean the that 25%-domesticated assemblage at upper Chogha Golan has spread from early cultivated population elsewhere that were undergoing the gradual selection for non-shattering, or it could indicate a local process, maybe not at Chogha Golan, but nearby that simply got started a bit later.

I would note in passing, that there was one previous suggestion of eastern emmer domestication, many years ago by Hans Helbaek in the 1960s based on rather poor samples collected by the Braidwood expedition at Jarmo in Iraqi Kurdistan in the 1950s, in which Helbaek reported intermediate types and mixtures of wild and domesticated emmer. These data were never quantified nor fully published but would potentially fit with the Chogha Golan finds. So a return to Jarmo may yet have some important archaeobotanical contributions to make.

On the whole, however, these new data offer strong support from a new dataset and a different research group for what I have been championing as a paradigm shift in agricultural origins research. From the paradigm of a rapid and singular agricultural revolution to a paradigm of protraction and entanglement that was messy and non-centric. (See, e.g. refs 2 and 19 cited by Riehl).
at July 15, 2013