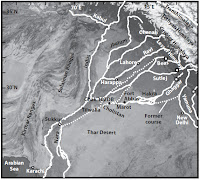 Recently published on-line in Geology  is a paper which might not appear on the surface to be very archaeobotanical, but which is important for thinking about the past agriculture of the Indus valley. This is by Clift et al (2012) on "U-Pb zircon dating evidnece for a Pleistocene Sarasvati River and capture of the Yamuna River". This paper provides sources for the headwater sediments in the various rivers of the Indus system based on zircon finger-printed (geological source dating in the 1000s of millions of years). These dated source profiles in turn are stratified in the Pleistocene and Holocene river sequences which have been dated by OSL. These river systems include the now extinct Ghaggar-Hakra river, often equated with the 'lost Saraswati" of Indian epic. The paper shows that while the Ghaggar-Hakra used to be much larger in the Pleistocene, drawing on the headwaters that now feed the  Yamuna, tha Yamuna had begun to flow  east into the Ganges before the End of the Pleistocene, and therefore well before the start of Harappan urban societies. Throughout the Holocene, including the Harappan period this river was fed only by seasonal monsoon rain in the east. This rain-fed Ghaggar-Hakra was  active until after 4.5 ka and was then covered by dunes before 1.4 ka. What this means is that the Ghaggar-Hakra, unlike any of the major Indus tributaries, was not fed by snow melt, which begins in Spring and may be unpredictable, but was entirely reliant on swelling its banks from the summer monsoon. This means it would have been an ideal river for winter crop agriculture, along the lines of the Nile flood regime which is keyed to the Blue Nile's monsoon source, with sowing of wheat and barley in Oct.-Nov. as the monsoon flood began to recede to leave behind a rich floodplain. These could then be left to mature until harvests in March or April, without fear of early snowmelt floods ruining crops. It really should come as no surprise then that so many Harappan Bronze Age sites concentrated in this valley. Nevertheless as monsoons gradually weakened (already underway during the Harappan period) with the flood water source retreating eastwards, and the Thar desert expanding, the valley became gradually drier and eventually choked with desert sands. This, however happened in Iron Age or post-Iorn Age times, so thus there is no basis for correlating any catastrophic shift in the Ghaggar-Hakra with the end of the Harappan civilization-- a notion which has often appealed to archaeologists.
[edited for typos 9.2.2102 DF]


For further discussion of the sedimentological results by geologist blogger: see here
at February 06, 2012

This is a study that, to my mind, definitively puts to rest the still popular idea of a perennial "Mighty Saraswati" river along which "Vedic Harappans" supposedly flourished and which they allegedly had to abandon because Sutlej and/or Yamuna was (were) diverted to west and east. The idea of using this scenario as a dating scheme for Vedic traditions was far-fetched from the very beginning. Now it lies in ruins.

Dear Dorian, could you reformulate the following paragraph in your post: "Throughout the Holocene, including the Harappan period this rice was fed only by seasonal monsoon rain in the east. were active until after 4.5 ka and were then covered by dunes before 1.4 ka." In fact, some lines seem to be missing here! Moreover, what "rice" are you referring to? Thanks and best regards,

The following is my basic model on Ghaggar-Hakra issue based on Clift et al. 2012."U-pb zircon dating evidence for a Pleistocene Sarasvati River and capture of the Yamuna River"; and it is a brief commentary to Dorian Fuller's recent note in his blog from 6 Feb, 2012. Any opinion is welcome.

As Clift et al. (2012) point out in conclusions of their paper, drainage capture did not cause directly the Harappan collapse. In other words, Sutlej and Beas rivers were already out of the Ghaggar-Hakra much time earlier (before 8000 BC), and by 2500 BC Ghaggar-Hakra was already a monsoon-fed river but strong enough to sustain winter crop agriculture with many inhabited sites at its banks (Fuller 2012-blog). Around 2200 BC Ghaggar-Hakra river started to reduce its flow due to monsoon's reduction (Enzel et al.1999, Staubwasser et al.2003, Wunneman et al.2010, Meadow & Patel 2011, Clift et al.2012), and by 1900 BC due to a 300 years of gradual monsoon's weakening resulting in poor crop production, Harappan people were forced to start migration from Ghaggar-Hakra banks towards better watered regions (Srivastava 2011). Later, the river continued to flow as a little brook in Iron Age, ceasing to flow completely in post Iron Age, and covered by desert sands before 600 CE.

This sounds entirely reasonable to me. I would only say that the dunes had started to cover the Ghaggar-Hakra before 600 CE

>
> Like Dr. Clift I, too, find your "basic model on Ghaggar-Hakra issue" (see above) entirely reasonable -- no irony intended. I hope you realize that such a model rules out any possibility that the Ghaggar-Hakra, a river sourced from the Siwaliks, fed only by seasonal monsoon rains (viz., not by Himalayan glaciers), and joined by just a few monsoon-fed tributaries, could flow to the Arabian Sea after, say, 8000 BCE.
>
> ...

My model also "suggests" that between 8000 and 5000 BC (Early Holocene), not being supported by Sutlej and Beas, but due to strong southwest monsoon (Srivastava 2011), the channel of Ghaggar-Hakra (which reached the sea by joining Nara river near Sukkur) did not disappeare but became thiner (not as wide or strong as in Pleistocene).

Between 5000 and 3000 BC (first part of Mid Holocene) Ghaggar-Hakra started to shrink even more until it stopped to reach the sea (via Nara river) due to a weaker monsoon.

But based on Clift et al's report of "major channels" ca. 7.3 ka at Marot and ca. 5 ka at Tilwalla, I can say that around 5300 to 3000 BC Ghaggar-Hakra did still flow beyond Cholistan. We must remember that weakening of monsoon was gradual all through Holocene.

This date clearly pushes the date of Rig-Veda much before 5000 BC, a date considtent with Kazanas's studies based on literature and also Priyadarshi's studies based on human DNA migrations. The earliest portions of the Reg-Veda pertain to the time from LGM to the Teleglacial, and the time immediate after.

Please find Priyadarshi's views with evidence in these articles:

This is awesome information that you provide us.
I am very thankful to you for sharing this information with us.
I am glad for new students.
Foundry 1805 oshawa