Last week Nature ran an article (Huang et al) with the headline that " A map of rice genome variation reveals the origin of cultivated rice." I here to report that this paper does not do what is says. There is nothing obviously relevant to locating where rice was first brought into cultivation, and the claims in the article are misleading and misguided. This is apparently one of most read Nature papers at the moment, so no doubt we will have to face lots of additional confusion over rice domestication-- and I thought there was already enough confused and misguided info out there. I have had several queries on this over the past week, so below is my quick response.

There is some important data here and details, and much for further critical analysis. BUT: This study changes nothing. Its stated conclusions are misleading, making false unstated assumptions and arriving at unreasonable and unbelievable conclusions.  In a way this mistake was inevitable and obvious. The authors have concluded the the closest wild ancestors to cultivated rice are living wild populations in the  Pearl River basin. The problem is that rice was domesticated not from living populations but from past populations almost certainly from regions where wild rice is now extinct (technically, we would say, extirpated). This study demonstrates that big science and lots of resources do not inevitably produce answers, but that nuanced analysis and critical thinking, and in this case some knowledge of Chinese history, are necessary to direct analyses.

It is clear that wild rice (O. rufipogon) formerly occurred much further north, through much of the Yangtze valley and even as far north as the Shandong peninsula and lower Yellow River basin. This is clearly attested from Chinese written sources of the Song Dynasty (i.e. about 1000 years ago). Even by that period it is likely that wild rice distribution was greatly reduced by the impact of China’s huge human population and agricultural expansion which took place between 6000 years ago and 1000 years ago. More so than anywhere else on earth central China (from the Yellow river  to the Yangtze) has supported massive human populations and suffered the corresponding habitat loss. In the late Bronze Age (Zhou dynasty), they were hunting elephants on the banks of the Yellow river (for a wonderful book on Chinese environmental history that takes this as representative of the broader sweep of Chinese history, see the Retreat of the The Elephants by Mark Elvin 2004). These would certainly not be represented in a genetic study of living elephant populations! (as blogged previously these may actually be an extinct elephant species with straight tusks) 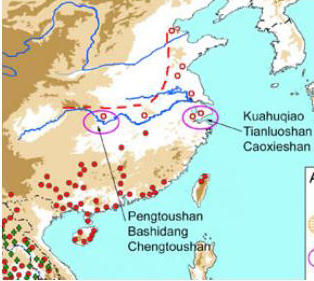 Although reference 2 in the article is to a paper I co-authored (Fuller et al 2010), this study clearly did not take on part of the fundamental implications of the maps and discussion early in that paper about the past distribution of wild rice, which has been modified both by major climatic change since the wetter and warmer early Holocene and by the impact of habitat destruction by Chinese farmers since the Neolithic. Areas that could support wild rice made excellent areas for agricultural reclamation: domesticated rice replaced wild rice over much of its original range in central China, which had the highest human populations. Even clearer, I think, is the paper I published in the journal Rice in 2011, which includes maps and a phylogenetic diagram illustrating the fallacy of using modern extant wild rice to represent the full diversity of past wild rice. By making this assumption in pinpointing a pearl river origins for rice pretty much all the authors subsequent conclusions are inevitably problematic. The  only way oin which genetics is going to advance pinpointing the number and location of domestication events in rice is through the recovery of ancient DNA. The fallacy an approach that relies purely on the modern time-frame of sampling is well-illustrated with European pigs and boar genetics, in which only via recovery of ancient DNA is it possible to see that the first Neolithic pigs were derived from Near Eastern boar and pigs but were later replaced by genetics from European wild boar (see: Larson G, et al. (2007). 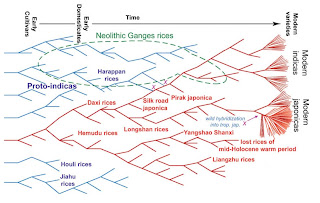 That modern populations of Oryza rufipogon are not the direct ancestors of japonica rice is implicit in the data in fact. The “obvious genetic distinction between japonica and Or-IIIa (Fig. 2a)”, implies that domestication rice and South Chinese rufipogon are in fact not really so close, just the closest available in linving populations. The intermediates found with Or-1 and indica are because Indian wild rice have been less decimated by the combination climatic changes and human impacts. Indeed this pattern is not new, but was already evidence some years ago, especially in the study of Cheng et al 2003. (Polyphyletic origin of cultivated rice: Based on the interspersionpatterns of SINEs). —this is discussed on the basis of the more detailed Ohtsubo et al paper or 2004 in my 2010 paper and various earlier articles in the archaeological literature). It is nice to see a much larger dataset in the this new paper re-affirm the results of the  p-Sine study, but there is not really anything new accept that the present authors have tries to grab a headline by claiming a Pearl River  origin for rice. It is the populations that bridge the gap between OR-IIIa and japonica which are crucial and these must be extinct populations of Oryza rufipogon that were brought into cultivation in the earlier Holocene. Geographically, this points back towards the north and the Yangtze.

The authors have found more extensive evidence that most domestication genes were selected in japonica and then entered indica through hybridization. Some geneticists, like the Japanese scholar Y-I Sato, or Susan McCouch at Cornell have been discussing this for years, and evidence for this has been mounting—you will also find discussions in the "rice consilience paper" or the "pathways to Asian civilizations" paper. It is misleading, however, to speak of this as “introgression” which implies that pollen flow from domesticated japonica into wild populations in India created indica. What is missing here, and clearly absent from this study, as it was from the Molina et al PNAS paper last year (see previous blog), is consideration of the chloroplast genome. This is older work, but really key, because chloroplasts are not carried in pollen. The Chloroplast (cpDNA) genome of indica and japonica are completely different. Thus introgression by pollen flow from japonica into wild rices is a very convoluted way to account for this hybridization as it would require domestication genes to then persist in wild population that were then re-domesticated. More reasobale in the model I have been promoting as the “proto-indica”model in which wild ancestors of indica (with indica chloroplasts) were under early cultivation or management and the were improved by hybridization with introduced japonica. This does not require domestication gene to somehow persist in wild population where they would be selected against (actually I would expect such introgression to lead to the evolution of weedy rices by "de-domestication": see this blog: ). It also implies a role for human agency in this hybridization process. This means that there were separate starts to cultivation (the human behaviour) for indica and japonica even if the domestication syndrome was shared and evolved one time.

Does genetic evidence on its own trump fossil evidence? No. Archaeological evidence, which is a fossil record of past rice and past human activities, has once again been simply ignored! Archaeologically early farming societies, with sedentism and villages and evidence for rice cultivation and rice undergoing morphological changes of domestication are found only in the Yangtze valley, as you probably well know. There is no equivalent evidence from Guangdong/ Pearl River. In fact when rice in the Lower Yangtze is showing morphological evolution under cultivation, i.e. between 5000 and 4000 BC, in the Pearl River and South China there are only sparse populations of hunter-gatherer fishers, represented mainly by coastal shell midden sites. These sites provide the earliest evidence for ceramics in the coastal zone (more than 10,000 years later than pottery in the Yangtze!). The first agriculture, based on rice, was introduced between 5000 and 4000 BP, although finds remain few and focused on the southern mountain slopes and north of the Pearl River delta. By this time the Lower Yangtze support urban sites, such as Liangzhu, support by extensive paddy field systems and intensive cultivation of fully domesticated rice. It makes no sense for rice domestication to be placed in the Pearl River region