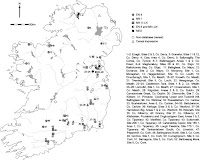 Two recent studies, one for the west and and one for the east, illustrate how crop packages unravel and become less diverse as they spread. The spread of agriculture is so often presented as a processing of unfolding, like a blanket being stretched from the point of origin outwards. This is especially true of the spread of Near Eastern agriculture, a truly diversified crop package of cereals (multiple kinds of wheat and barley, pulses, flax, plus livestock). But when the spread of agriculture is examined in detail, it is clear that crop species and varieties drop out along the way, and those which do make it probably become less genetically diverse. A recent database analysis of Neolithic Ireland illustrates the extreme western edge of Neolithic dispersal from western Asia. Published by Meriel McClatchie (whose PhD hails from here at UCL) and various collaborators (including UCL colleague, Sue Colledge), has been published in Journal of Archaeological Science, "Neolithic farming in north-western Europe: archaeobotanical evidence from Ireland" . This study demonstrates the clear pattern of quantitative reduction in most crops in Neolithic Ireland compared with elsewhere in Europe. Emmer wheat, virtually no einkorn (and one has to ask how securely identified any einkorn was), naked barley and a bit of flax-- that pretty much sums up Neolithic Ireland, in contrast to the 8 "founder crops" that are meant to characterize the start of agricultural dispersal from the Near East.

A similar barley and wheat (with a dash of flax) characterizes the UK early Neolithic, which like Ireland see the dramatic introduction of cereal farming shortly after 4000 BC. As recently suggested in the study of radiocarbon dates from the UK (Stevens and Fuller in Antiquity, Sept 2012). One looks forward to further Irish Analyses to see whether the collapse of Neolithic cereal farming that Chris Stevens and I see in the England and Scotland cereal data also held true in Ireland. 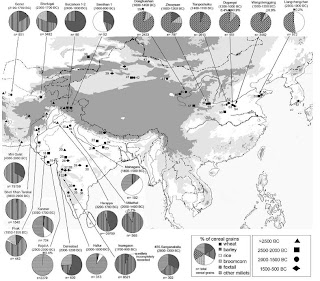 This parallels what we see in the East, in India for example, which has recently been mapped in the paper I co-wrote with Nicole Boivin and Alison Crowther, "Old World Globalization and the Colombian Exchange: comparions and contrast." In South Asia wheats (including glume and free-threshing), barley, several pulses and flax, all seem to be important on the Indus Valley, but this package becomes less frequent and less stable as one moves into "inner" India. Sure enough wheat and barley make it both eastwards to Bihar and south to Karnataka, but generally with a strong preference for barley few or no pulses. In China only select wheat, and rarely barley, makes any showing at all, and there wheat is quantitatively negligible. This highlights that in some cases the caloric and subsistence needs are not likely to be served by the introduced cereals from the Near East. Some years ago I made the case (Antiquity 2005) that wheat and barley in Southern India might also have been status crops, used perhaps for beer, rather than as staples. One can ask the question as to what extent some the westernmost spread of cereals in Europe was as much about preferred foodstuffs rather than subsistence necessity when wild sources like hazelnuts were still so readily used and available?

There are broad similarities but also differences in the outward spread of crops from the Fertile Crescent. While in India and China this spread is seen largely in terms of the adoption of crops by local populations, in western Europe there is evidence for a greater role of migration. While in India we tend to attribute this to the local importance of other crops, Brachiaria ramosa and mungbean in the south or rice in the Ganges, that was clearly not the case in Ireland. So I wonder if we are seeing both the effects of crossing ecological frontiers, perhaps quicker than some crops can adapt, or beyond which some crops just can not adapt. Northern Europe certainly presented great challenges to agriculture, highlighted in its extreme margins such as Norway, but also in Britain by the apparent abandonment of cereals in the later Neolithic, perhaps as temperature retreated somewhat (Stevens and Fuller 2012). Monsoon Asia was not the most suited to the Near Eastern crops either, which also points towards social rather than caloric drivers in crop spread. In another parallel with distant Britain the agriculture and sedentism in parts of the Deccan, most clearly in western Maharashtra, where wheat and barley were quite prominent, appear to have collapsed and possible were abandoned over a wide area (in this case around 1200-1000 BC at the end of the Jorwe period).

Both of these studies show the importance of larger regional datasets, in which broad patterns are often visible even with simple quantification. This broad patterns raise questions that in turn call for more intensive sampling and local studies to work out wheat is actually happening at the periods of intial adoption or abandonment. What is missing currently is more usable data from the middle, Central Asia, the Iranian plateau, etc., so that archaeobotanical databases can become truly continental across all of Eurasia.