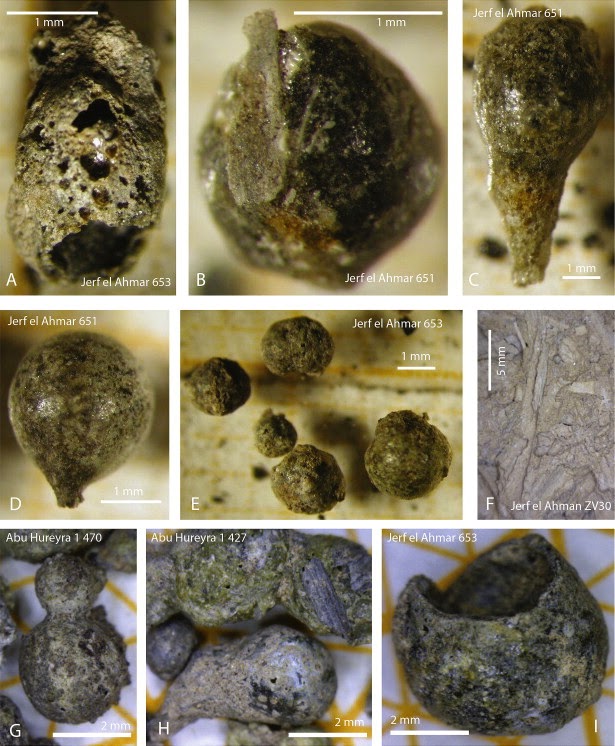 I recently collaborated on a paper that analyzed small scoriaecous (glassy) droplets from flotation samples, focused on site in Syria relating to early agriculture, including Abu Hureyra, Jerf el Ahmar, D’Jades, Tell Qaramel: Thy et al. published Journal of Archaeological Science. Previous some of these from Abu Hureyra samples (which are stored at the UCL Institute of Archaeology), have been included in a study from 18 sites around the world that argued that these Younger Dryas spherules derive from a asteroid impact 12,800 years ago that set off the younger Dryas (see Wittke et al PNAS). The analyses in our recent paper argue that the composition of these can be explained by natural soils on earth being heated to high temperatures, but no unreasonable for human settings, such as house fire. Our study includes sites that are significantly after the alleged asteroid impact, and we note that even later example occur.  Both myself and co-author Willcox are primarily archaeobotanists, which mean we float archaeological sediments in water to recover ancient charcoal and seeds and scoria droplets are light enough and contain air bubbles and so they float along with the charcoal. We find them in many archaeobotanical samples around the world and of many periods, but certainly not in all samples. This suggests that they are formed occasionally by circumstances on ancient human sites.

This article generated considerable science media attention, and some vociferous debate from the proponents of a Younger Dryas impact (which I have previously written critically about on this blog: the vexed issue of "nano-diamonds"). In the US it made it into CBS news and in the UK into the Daily Mail, and, treatments can be followed from the UCL news item.

Superficially there is much in common between these spherules and the composition of the South India Neolithic ashmounds, where we have large deposits, even mounds, of scoriaceous material, dating from 3000-1400 BC, which appear to be created through intentional burning of built up dung and other deposits in cattle penning sites, reaching temperature of 1200 Centigrade or more leading to scoriaeceous formations.

In the early  Near East we are dealing with similar kinds of temperatures. What is intriguing is that these do seem to be frequent inclusions in samples from early village sites, which suggests that circumstances on these first village lent themselves to large fires periodically. I think they are likely to come from uncontrolled fires, as we expect these to reach really high temperatures in some places. Controlled fires in hearths and ovens and I guess will often be kept at lower temperature more manageable for cooking.  Although I would accept that more experimental work could explore this question. I would see this as a by-product of people building structures and accumulating rubbish fairly densely in these early settlements and not really having fire prevention or fighting practices. Village life also evolved gradually, and it may but that these earlier forms of village were not very well adapted with respect to reducing accidental fires.

Because the Younger Dryas and the asteroid impact have been related to terminal Pleisticene megafaunal extinctions, much of the media attention revolved around this issue. The Daily Mail reporter asked me “Do you think this lends support for the other theories of what may have led to the extinctions of the Pleistocene megafauna? What theory do you favour yourselves?”

I think the obvious big player in megafaunal extinctions is humans, human population growth, the modification of environments and the changing of foodwebs. Human over-hunting is a somewhat simplistic version of this hypothesis. In the Old World the ecosystem space of large herbivores has been mostly replaced by domesticated cattle, sheep, goats, horses and agricultural fields tend to exclude large herbivores. Therefore the habitat available for large herbivores has been reduced by these replacements, while growing human numbers have added to hunting pressure. These are all key developments of the Anthropocene or the “Used Planet” I written about before. This kind of process can be illustrated with the near extinction of American Bison. Yes these were hunted, but the big reason they were greatly reduced is the prairies of the US became land for farming and cattle ranching so much less and much more marginal habitat was left for the bison, so there was no way for them to recover from impacts of hunting. In the Americas domesticated herbivores are less significant but the addition of humans only about 15000 years ago must have massively altered ecologies and food-webs in ways that destabilized large faunal numbers. Climate change added top these pressures, but I do not see a need for extraterrestrial forces in this equation.


Returning to the spherules: Ultimately scientific evidence should be able to determine the source of these nodules and the reality of a Younger Dryas asteroid impact. The final verdict is perhaps not yet in from the wider jury of the research community. In favour of such an impact is, perhaps, the fact the YD look anomalous compared to the onset of previous interglacials (see, e.g. those in Ruddiman’s alignments in his Anthropocene review). However, a crater is missing and a clear smoking gun for this cataclysm is illusory and debatable. Our article is just one such criticism, but see also the astrophysics critique of Boslough et al (2012).

Nevertheless, I think there is a more significant philosophical difference. A cataclysmic younger dryas provides an extraterritorial trigger for megafaunal extinctions and the start of Near Eastern farming. Human actions, modifying environments and improving the techniques and technologies to do so are what drove the major changes of the early Holocene. Some of this may have been response to changing climate, to shifting in photosynthetic productivity brought about by post-glacial rise in carbon dioxide, but those changes were not sufficient on the their own: it was cultural action, niche construction (see, e.g. Bruce Smith 2011) that was the necessary catalyst.  But as the evidence clearly indicates the origins of farming and plant domestication was protracted in the Fertile Crescent and elsewhere, taking millennia of plant evolution, trial and error of human techniques and a messy process of coevolution between culture and it environments (the entangled process of domestication: see this PNAS paper from 2014). There is no strong case for a Younger Dryas trigger to the start of cultivation, and certainly not for the bigger economic transition to domestication and farming. Outside the Near East almost all instances of the transition to domestication and farmer economies occur much later, the later Early Holocene or Mid-Holocene (see. e.g. the summary in Larson et al.from last year in PNAS). We have our own species to blame; I don’t think we need to look to outer space.
at February 27, 2015