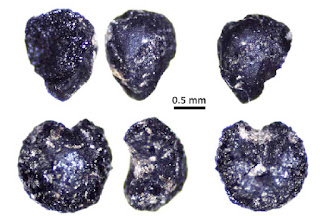 For the past decade the Xinglongwa culture of eastern Inner Mongolia (Liao River valley) has been regarded as a likely cultural context for the domestication of common millet (Panicum miliaceum), on the basis of significant quantities of Panicum grains associated with some of the many houses excavated at the site of Xinglonggou (see, e.g. Zhao 2011). Recently, new excavations by a Chinese-Israeli collaborative team (with some London archaeobotanists) explored parts of two new small settlement sites of this period, Jiajiagou (5950-5700 BC) and Tachiyingzi (5550-5450 BC), including intensive flotation, have been published this week in PLOSone. At both sites a single dwelling was excavated and sampled, and the archaeobotanical data indicate a predominance of wild plant foods, including walnuts, apricot endocarps, hawthorns, Phellodendron, but Panicum miliaceum is also present is small quantities-- 16 in total at both sites, with more and higher ubiquity at the later site. Most of these Panicum grains are more elongate then plump, with size and L/W ratios that correspond better to Panicum miliaeceum subsp. ruderale, known today as a weedy species but probably descended from, or at least comparable to the origins wild progenitors. We take this to suggest that grain size/shape was still under going evolution over the course of the 6th millennium BC, and thus it may not have been finished evolving into its domesticated form. This fits the now recurrent pattern of protracted domestication processes in cereals (explored previously when "de-centering the fertile crescent", and demonstrated more statistically in Allaby et al "Geographic mosaics and changing rates of cereal domestication").

These data, along with those from Xinglonggou indicate that while Neolithic sedentism had been established in Northeast China by the early 6th Millennium BC, the evolution of domesticated Panicum miliaceum and the establishment of agricultural economies still took rather longer. Another conclusion of the paper is that sedentism and this domestication process took place during stable and quite conducive climatic conditions. This argues against the hypothesis that domestication in this case was driven by climatic stress, or that it should be linked to major climatic fluctuations that characterize the start of the Holocene (a hypothesis promoted by Bar-Yosef 2011, amongst others)

It is worth noting that the later site (Tachiyingzi) also has the presence of a few Setaria italica and S. viridis, and a couple more plump grains (pictured above). While none of these grains was directly dated there is some possibility that more fully domesticated grains will prove to be intrusive. Amongst the direct AMS dates, on wild foods, four proved to be 6th Millennium BC, but one date on fragments from lotus seeds turned out to be intrusive and late Bronze Age. This highlights the need for more direct dating of crop remains, a point highlighted by recent debates over the arrival of wheat in Late Longshan China, for which numerous false alarms have been dismissed via direct radiocarbon dating (see "Assessing the occurrence and status of wheat in late Neolithic central China: the importance of direct AMS radiocarbon dates from Xiazhai").

So the case for a millet domestication in Northeast China in strengthened. This does not rule out other dometciation centres-- which there must have been for Setaria italica at least, and perhaps Panicum milieceum. Domestication can be regarded as taking place alongside and after the emergence of sedentism, but further data are needed to better document this, and to assess the extent to which initial cultivation  of wild millet was linked to the shift to sedentism or not.
at July 20, 2019

My name is Mrs Aisha Mohamed, am a Citizen Of Qatar.Have you been looking for a loan?Do you need an urgent personal loan or business loan?contact Dr James Eric Finance Home he help me with a loan of $42,000 some days ago after been scammed of $2,800 from a woman claiming to been a loan lender but i thank God today that i got my loan worth $42,000.Feel free to contact the company for a genuine financial service. Email:(financialserviceoffer876@gmail.com) call/whats-App Contact Number +918929509036 Dr James Eric Finance Pvt Ltd

I'm Serenity Autumn, currently living in Texas city, USA. I am a widow at the moment with Four kids and i was stuck in a financial situation in May 2019 and i needed to refinance and pay my bills. I tried seeking loans from various loan firms both private and corporate but never with success, and most banks declined my credit. But as God would have it, I was introduced to a woman of God a private loan lender who gave me a loan of 850,000.00 USD and today am a business owner and my kids are doing well at the moment, if you must contact any firm with reference to securing a loan without collateral , no credit check, no co signer with just 2% interest rate and better repayment plans and schedule, please contact Mrs Mr Bejamin Lee On Email 247officedept@gmail.com   And Whats-App +1-989-394-3740. He doesn't know that am doing this but am so happy now and i decided to let people know more about him and also i want God to bless him more.

This is awesome information that you provide us.
I am very thankful to you for sharing this information with us.
I am glad for new students.
cypress downtown student residence toronto