One of the more exciting methodological developments in archaeobotany I have seen lately is the use of ct-scanning to look into chaff tempered ceramics and to extract in virtual terms the invisible plant remains therein. Aleese Baron, Tim Denham working with a range of colleagues have applied ct-scanning and computed tomography to produce images of rice chaff and rice spikelet bases from Neolithic sherds from three Neolithic sites in Vietnam published in Nature's Scientific Reports.
The sites are An Son, Loc Giang and Rach Nui. In all cases, conventional archaeobotanical evidence through macro-remains has been limited, although rice and millet as well as various wild taxa were reported from flotation at Rach Nui earlier this year. This makes the potential to recover plant remains from ceramic tempering quite tempting as an additional source of evidence on past plant use. As demonstrated by new evidence on sorghum domestication found in old sherds. However, while traditional we may cast impressions of those remains that are haphazardly represented on the surface, ct scanning allows full three-dimensional voids to be recovered from the interior of the ceramic fabric. 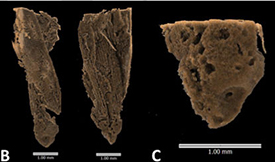 While patience and skill required to get such images is impressive, the results are breath-taking, with images of domesticated type, non-shattering rice spikelet bases pretty much as good as those found through flotation emerging (see left). It is not any surprise that these Neolithic folks in Vietnam were already dehusking fully domesticated rice and using the chaff to temper their ceramics-- this very much fits current hypotheses for the spread of fully domesticated rice into mainland southeast Asia from the end the Third Millennium BC (e.g. the recent review by Castillo in the journal Man in India). Methodologically, however, opens up the possibility for studying old ceramic collections from sites that may no longer be amenable to sampling through flotation or which lack good stratigraphy, at least so long as some ceramics are chaff tempered. This could prove quite useful for any earlier, less sedentary phases in the spread of rice, just as sherd impressions have proved so useful in Africa, right across the Sahara and sub-Sahara. Studying sherd impressions just got powerful new tool.

A few years ago I posted a blog on Earlier sorghum in Sudan highlighting the work by Alemseged Beldados and Constatini on sherd impressions from Kasala from the early Second Millennium BC. At the time I raised the question as to whether or not these impressions were wild or domesticasted. At the time I bemoaned the lack of SEMs and attention to spikelet base remains. That blog post attracted the attention of Frank Winchell (see his comments at the time), and around the same time Frank had met Michael Brass, then a PhD student at UCL. Through these interactions, online and eventually in person, we started a collaboration to re-examine ceramics that Frank has collected and studied from a site of Kasm el Girba 23, to the southwest of Kasala, from field work over 30 years ago. Frank has long been impressed by the present of a large number of apparently seed or chaff tempered ceramics in a ware type called Kharadag Plain, and through extensive examination in the UCL archaeobotany laboratory, casting impressions and SEM study, as well as re-assessing our reference material of domesticated and wild sorghum. 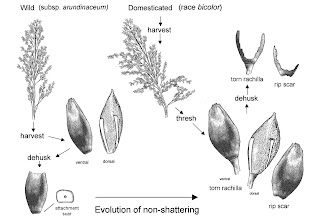 The results are highly significant, and have now been published in Current Anthropology. Domesticated sorghum morphologies were present much earlier than previously found, i.e before 3000 BC, more than a millennium earlier than the Kasala finds or finds in India. In addition the material represents a mix of almost equal parts morphologically wild (smooth spikelet base) and domesticated (torn rachilla). This suggests that the Kasm el Girba material is around midway in the domestication process, and by analogy with the protracted domestication now well documented for rice, wheat and barley, we should be considering this as an advanced stage of pre-domestication cultivation, and seeking the beginnings of pre-domestication cultivation sometime before 4000 BC. This has received some science journalism attention from Nature and Science News.

One of the other highly significant patterns is the Kasm el Girba faunal evidence, as previously published by Joris Peters: it represents a wild hunted savanna fauna. It lacks the evidence for sheep, goat or cattle, in contrast to the evidence for some pastoral component to the economies of the Neolithic around Khartoum from the Fifth Millennium BC at least. This calls into questions the widely accepted notion of "cattle before crops" in Africa (as per Marhsall and Hildebrand 2002). Certainly pastoralism gets established in parts of the Sahara around 6000 BC, long before any evidence for cultivation. It is also true that the earliest evidence for domestication of pearl millet, reported by Manning et al (2011), occurs alongside evidence for cattle and caprine pastoralism. But in this case we seem to see evidence for cultivation of early sorghum and sorghum domestication taking place among fairly sedentary hunter-gatherers and not their Sahelian pastoralist neighbours. This raises some exciting questions for further research in Sudan, and calls for renewed efforts in zooarchaeology and archaeobotany of the Early to Middle Holocene in northern Sudan, etc.
at October 26, 2017 2 comments: