Using big machines to look at the finer aspects of seeds

This year has seen three studies on high resolution x-ray computed tomography applied to archaeobotany, one using ct-scanning to recovered chaff hidden in ceramics (see Finding Rice Domestication in Clay), and two using a synchrotron to peer inside seeds, including soybeans and horsegram.

This past summer, I published with colleague Charlene Murphy, a Scientific Reports article on domestication of the Indian crop horsegram. While this article represents an important contribution on the domestication history of a major crop in India, and evidence for evolution of morphological change during that crops domestication in South India (see also our GRCE paper, reviewing all that is known about horsegram origins), this is really more significant for the methodological contribution to the archaeobotanical documentation of domestication. We were able to put our small archaeological seeds in a very large machine, the Diamond Light synchrotron (shown at left). which allowed us to non-destructively capture the the internal structure of the entire seed (not as straightfoward as it sounds as it takes a lot of computing time). And from this we could measure seed coat thickness on any of the 1000s of cross-section slices through our seeds (like that below/right) 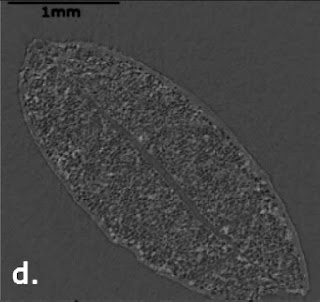 One of the well-known domestication syndrome traits in pulses is the thinning of the seed coat, tied to loss of germination inhibition. But it has been difficult to document this archaeologically. Seed coats are often destroyed in charring, but even if preserved they study on charred seeds would require destructive breaking of seeds. And even if damaged, it might only be possible to document the seed coat thickness in one or two places with an SEM or high powered normal microscope. As a result this has been rarely documented, which has lead to a fair degree of speculation on the evolution of thin-seedcoat, readily germinating pulses, as the result of conscious selection of the readymade mutants in the wild (although none have been documented in the present day)-- the domestication before cultivation hypothesis applied to lentils-- or positing a rapid conscious selection by those who initiated cultivation-- lets call this the pea breeding before agriculture hypothesis. The truth appears to be, however, a gradual evolutionary process as seed coats thinned over time, much like the evolution of increasing seed size or the non-shattering in cereals-- at least in horsegram. This can be seen in the chart below showing the thinning seed coat along side a trend in seed size increase in horsegram. Further work is needed on additional pulses to see if this pans out as typical of the pulses domestication processes, or whether there was variation, or indeed any cases of plucking domesticated types from the wild-- of which I am doubtful. At least now we have a method for approaching this. 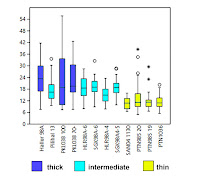 This is actually, quite logical: established stands of pulses could be maintained and wild-type dormant seeds would constitute an established seed, and would recurrently add new plants to the the stand over a series of years. But due to annual human harvests mutations that reduced dormancy would get selected, and would be particularly important for any new populations planted in areas without existing wild populations. In this context we can expect the gradual evolution for thinner coated, more easily germinating seeds through selection across what are presumably multiple loci, as is evident in our archaeological horsegram data (shown left).

Soybean oil content in charred seeds?
The claim for earliest use of a synchrotron to look at charred archaeological pulse seeds, however, goes to our colleagues in China, in collaboration with Prof. Gary Carwford, Shandong archaeobotanist Xuexiang Chen. They argue that soybean underwent selection for increased oil content in prehistory during domestication-- undoubtedly true-- and that this can be tracked archaeological through a change in the number and size of pores visible on the inside of charred soybeans viewed through the synchrotron and High-Resolution Computed Tomography. I remain unconvinced on this last point, and although the paper reports on examination of modern soybeans and, other oily crop seeds, and experimentally charred seeds none of these are illustrated or really described so as to support this interpretation. The authors infer that more small pore is a product of more oil whereas large pores represent burned out protein, but is this true. The differences look to me more like artefacts of carbonization processes, and not a good proxy for the internal anatomy of the original uncharred soybeans. As the few illustrated example suggest larger and irregular pore are present in seeds with more distorted external surface anatomy (e.g. c), whereas small pores are more evident in better preserved examples (e.g. f).

Unfortunately, the central claim in this paper does not really add up, or at least are not well justified and explained in the text. This makes me very nervous about accepting the main conclusion of the paper, i.e. that the authors have demonstrated an increase in oil content in soybean during domestication by measuring the quantity of bubbles (voids) of different sizes in charred archaeological soybeans. Small voids are attributed to oil content and large voids to protein—but this is never demonstrated (for example in modern and experimental charred examples) or backed up by citations on soybean anatomy, as to why these voids should differ between oil and protein. That soybeans are oily, in contrast to most pulses is clear, but this also has major implications for the nature of archaeological finds. Most carbonized archaeological soybean are poorly preserved, distorted, full of large voids and small voids and very shiny on their interior. This is contrast to pretty much every other pulse I have seen archaeobotanically, from Vigna spp. to lentils and peas to Lablab. Even in the Chinese samples, presumably subjected to similar formation processes Vigna angularis seed present typical features of carbonized pulses, including a dense charred matrix with distinct cotyledons. In Glycine cotyledons are rarely evident and their interiors are heavily distorted by voids and bubbles. The obvious deduction is that this state of things is the result of the oil content in soybeans, and of course many other oily seeds, from cotton to sesame, also tend to show similar levels of bubbling and porosity when charred. If large voids in soybean are due to protein burning up during carbonization then surely one would expect to see this in any pulse, all of which have at least 20% protein content. It is true that the oil in soybean is contained in fresh seeds in many small droplets/sacs but upon charring things are likely to end up being very different. Oils are going to burn to more readily to gas than carbohydrates or proteins and thus create more bubbles and explosions of expanding gas. As this progresses and cracks to the outside of the seed allow penetration of gas (and some oxygen) from the exterior, one would expect this to speed up. The persistence of small voids then might be predicted to be the result of less oxidation, less temperature and perhaps other variables of charring conditions of a given seed. Cracking and penetration of gases into the charring seed may indeed be affected by aspects of domestication—thinning of seed coat, increase in seed size. Indeed, larger seeds seem likey to leave larger parts of their interior cotyledons unexposed to exterior cracks and oxygen; and in this context would be expected to preserved more small oil bubbles as a side effect of seed volume increase: i.e. the difference over time would reflect preservation artefacts rather than selection for genetic change. It is hard to see how at this stage we can deduce difference in underlying phenotype and genetics from this sort of data—at least until we have much better grasp on who charring conditions affect the distribution of seed contents, and this calls for some systematic experiments.
Undoubtedly soybeans were selected for oil content, but when and how this took place in relation to other domestication traits remains sadly unclear. I find I have to reject to conclusions of Zong et al., although their paper doe illustrate the potential analytical power of using a synchrotron to peer inside archaeological seeds
at November 21, 2017