A recent paper from the UCL Early Rice project has received the  BenCullen prize from Antiquity for 2019 (jointly with other excellent papers). The paper, “Social responses to climate change in Iron Age north-east Thailand: new archaeobotanical evidence” publishe last year, by a co-authorship team lead by Cristina Castillo (UCL), together with Katie Miller (MSc Environmental Archaeology, UCL, 2014), as well as colleagues from Oxford, Charles Higham from New Zealand and Nigel Chang (Australia) has shared this prestigious prize. 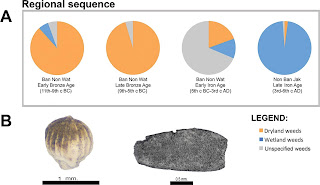 The study is based on a long a long regional sequence of archaeobotanical data in northeast Thailand between 3100 BP and 1300 BP from archaeobotanical analyses at Ban Non Wot and Non Ban Jak, both near modern Phimai. In this sequence dry rice weeds decline as wet rice weeds appear around 2100 BP, with an increase in the wet rice and disappearance of dry rice weeds by 1500 BP. This indicates that in the face of increasing aridity rice cultivation was bolstered by irrigation, but it also suggests that increasingly hierarchical societies in the region were investing increasing labour in more intensive, wet rice production. This indicates that wet rice cultivation in the Southeast was a secondary development driven by growth of social complexity, and perhaps population growth, rather than driving the demographic underpinnings of the initial Neolithic in the region. It can also be seen that in this region climatic conditions that made it harder to grow rice based on rainfall lead to cultural techniques that altered the environment to make this crop possible. While rainfed rice has persisted in the hills of Southeast Asia into recent times, throughout most of the plains wet rice cultivation has been the predominant cultivation system which has supported historically known states and urban systems in the region (as aptly described for the past millennium in James Scott's Art of Not Being Governed). The beginnings of these dynamic between wet rice states and hill tribes could have only started form the Iron Age onwards.