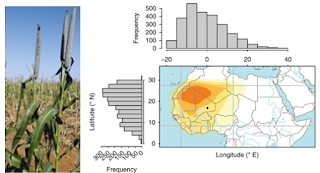 Modern genomes have the potential to reveal alot about evolutionary history and past geography of a crop. Of course there are some limitation to the degree that it hard to account for extirpated past populations, such as the wild rice that used to grow in central China or the wild pearl millet that used to grow what is now the Sahara. A new study of pearl millet (Pennisetum glaucum) by Bugarella et al (2018) provides a convincing set of deductions from genetic history that infer an origin of the crop in the western Sahel/Sahara around what is today northern Mali/northeast Mauretania (map at left), followed by early differentiation between those of the far west (Mauretania/Senegal), and the eastern Sahel (e.g. Sudan) from those in the core zones of western Africa. Based on spatial simulations that take into account a few archaeological data points they also estimated the onset of the expansion of pearl millet as crop out of its centre of origin a starting ca. 4800-4900 years ago. This fits nicely with current archaeobotany. The earliest, already domesticated, pearl millet is from northeastern Mali in the lower Tilemsi valley between 2500 and 2000 BC. Perhaps a parallel trajectory of dispersal is represented by the Tichitt Tradition of Mauretania (from ca. 1700 BC). What remains an open question is whether these two area represent distinct domestication trajectories (a point suggested by MacDonald et al 2009; Manning and Fuller 2014), much as we see the West Asian Fertile Crescent as a mosaic of domesticators across the region as more or less the same time (e.g.here or there ). The zone delimited by the genetic study could well represent a sort of "West African Fertile Crescent" in which more than cultural groups were in the process of cultivating and domesticating pearl millet during the middle Holocene. The differentiation of a far western genetic groups would then represent dispersal first through the Tichitt-Oualata traditions of Mauretania and onwards to the Sengal valley- which fits with Brunken, De Wet and Harlan's old taxonomic differentiation of a western race leonis (Economic Botany 1977). A rapid and early spread easterns to the eastern Sahel, which was followed by local introgression with local wild populations, is also implied in this genetic analysis, and fits with the albeit limited archaeobotanical evidence for pearl millet (both morphologically domesticated and wild) alongside cultivated sorghum in the Kasala region of eastern Sudan around 1850 BC, just recently published by Beldados et al. (2018).
at September 21, 2018

Nice post. I study something tougher on different blogs everyday. It can at all times be stimulating to read content material from different writers and apply just a little something from their store. I’d want to use some with the content on my weblog whether or not you don’t mind. Natually I’ll give you a link in your internet blog. Thanks for sharing. casino blackjack

Krishna Research Seeds Private Ltd (KRSPL) is a 100% subsidiary of SeedWorks International Private Ltd (SWIPL). Krishna Beej is the umbrella brand for Pearl Millet & Mustard. We have proprietary research and are building up to the next level with enhanced investments in setting up new breeding and testing locations in Pearl Millet and Mustard. A reliable supply chain getting strengthened with state of the art processing and cold storage facility at Sonipat. We have an established distribution network and a strong brand equity. SeedWorks under the brand of Krishna Beej offers a wide range of seed solution for Pearl Millet (Hybrids) and Mustard (Hybrids/Varieties).

Awesome article! It is in detail and well formatted that i enjoyed reading. which inturn helped me to get new information from your blog.
indian grocery home delivery near me

We @ SeedWorks provides a dynamic hybrid rice solution by committing to deliver superior products with our vast research programmes since inception. Present across all segments and geographies of hybrid rice, SeedWorks promises to enhance the farm sustainability by offering unique value proposition contributing towards farmer’s prosperity.

Krishna Research Seeds Private Ltd (KRSPL) is a 100% subsidiary of SeedWorks International Private Ltd (SWIPL). Krishna Beej is the umbrella brand for Pearl Millet & Mustard. We have proprietary research and are building up to the next level with enhanced investments in setting up new breeding and testing locations in Pearl Millet and Mustard. SeedWorks under the brand of Krishna Beej offers a wide range of seed solution for Pearl Millet (Pearl Millet Seed Manufacturing Company) (Hybrids) and Mustard (Hybrids/Varieties).