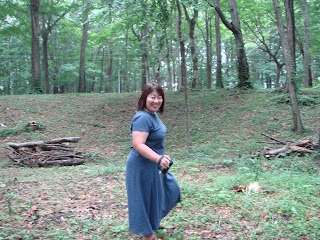 It is with sadness that I report the passing of an archaeobotanical colleague and friend, Leo Aoi Hosoya, who passed on 10 July 2019. Our condolences go first to her family, her husband and daughter. Many archaeobotanists at the IWGP held in Lecce in June 2019 will recall her paper presented in absentia, that began with an amusing video message from Leo. Sadly her health did not improve. "Leo" was actually her adopted English name, based on her zodiac sign, as she had thought that her Japanese name, Aoi, might be difficult to manage for the English. So as Leo she became known to many of us and she played a role in international research not just through her own work (on archaeobotany in Japan and China) but through her place in international networks and networking, facilitated by good humour, friendliness and lack of negativity; she was always contagiously optimistic.

Aoi was born 14 August 1967. Her global journey could be said to have begun with her post-graduate degrees at Cambridge (from 1992), including her MPhil and PhD. I met her when I started my Master's there in 1995 and we were lab-mates once I started my PhD in 1996. Together with Marco Madella and Victor Paz we formed a group of young researchers interested in various parts of Asia, concerned with rice, millets, etc. and how research approaches that were well-established in Europe, such as analysis of arable weed floras and crop-processing could be translated into new approaches to understanding the Asian past. Leo's work towards her PhD, focused on the Yayoi period in Japan, was very much pioneering, addressing the patterns of crop processing in rice and millets for the first time. She was among the very first archaeobotanist to pull rice spikelet bases out of flotation samples, which we later realized would be essential for studying rice domestication. But her knowledge of Japanese ethnohistorical and archaeobotanical sources also opened my mind to the rich traditions of use and processing of acorns, which very much went on to influence my thinking about nut use in the Neolithic. Her Phd was completed in 2002, but published in a revised monograph-like article in Senri Ethnologica in 2009 [PDF], its title's phrase"Sacred Commonness" reflects her strong interest in relating the mundane of crop processing and agriculture to greater symbolic and social patterns that run through past societies. Her interest in theorizing the social while working through empirical science remains inspiring. Her time as a PhD student in Cambridge brought her to her first International Work Groups for Palaeoethnobotany in 1995 and 1998. (See also the in memoriam of Prof. Martin Jones here).


For several years, Leo was a post-doctoral research associate at the Research Institute for Humanity and Nature (Chikyukan) in Kyoto. There she was part of the team of a project "Agriculture and Environment Interactions in Eurasia- A 10,000 year history" directed by Prof. Yo-Ichiro Sato, where I was lucky enough to be an invited researcher in 2007 and 2009. She was also part Junzo Uchiyama's Project "NEOMAP", which was looking comparatively on the Neolithic traditions throughout northeastern Asia. Those were optimistic times for international collaborations, new empirical archaeobotanical research and integration across various datasets. For me, Leo was ever a guide to parts of Japan and Japanese archaeology, that I would have otherwise missed. From visits to sites in Hokkaido or Aomori (such as Komakino, below left, or Kiusu, shown at the top), to a memorable trip over the mountains from Kyoto to visit the Torihama shell midden museum to chase down measurable bottlegourds (in 2009; sadly I could find no photos of anything but gourds and woodend tools from that trip- although it resulted in one joint publication on East Asian gourds). It was also a time of many food-centered parties held at the guest house of RIHN. 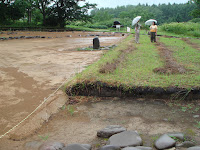 It was at this time that both Leo and I came independently to collaborations with the Zhejiang Institute on the archaeobotany of Tianluoshan, an exciting Neolithic discovery in the Lower Yangtze region made in 2004. Over the years of 2006 and 2007 we made a few tips each to the site to work on sieving and sorting soil samples for plant remains to document the extensive wild food use at the site and the many rice spikelet bases, which lead to recognition of an assemblage in which rice was still undergoing evolution of domestication (another joint publication in Science). This work built on Leo's early efforts both of pulling rice spikelet bases from flotation samples that started in her PhD and of understanding acorn use, which she usefully summarized in this 2011 article.

While in Kyoto, Leo took a lead roll in organizing some targeted archaeobotanical meetings, bringing together archaeobotanists, geneticists and ethnographic perspectives, first on rice (held in Kyoto in 2009), and later on millets held in Tokyo in 2012. Both lead to special journal issues edited by Leo, on rice, and millets. Subsequent meetings on rice that were held in Beijing and London very much grew out of that first Kyoto meeting. In 2009 she also came to London on a British Academy Darwin researcher's award, and conducted some preliminary work on the processing and detoxification of peach and apricot seeds, plausibly used as nuts or famine foods in Neolithic China (article pdf here).

In subsequent years she became involved in ethnoarchaeological work on rice storage in Bali (2016), which contributed to her ongoing wholistic approach to understanding rice, not just as an agricultural product but as part of social and culinary reorientation of society, as part of what she referred as the "routine-scape" (2014).  Most recently she has been one of the sub-project leaders of a major Japanese-lead international project on "Integrated Studies on Rice-based civilization" for which she has taken a multi-proxy approach to understanding of cooking pots have been used and how this changes over the course of the intensification of rice use in the Lower Yangtze Neolithic an the Yayoi in Japan. She presents some of this work in a chapter published in honour of Martin Jones' retirement, and at the symposium held in Cambridge in Nov. 2018; her chapter "Rice and the Formation of Complex Society in East Asia: Reconstruction of Cooking Through Pot Soot- and Carbon-deposit Pattern Analysis" can be downloaded as part of the book Far from the Hearth (2019). Her in absentia presentation for 2019 IWGP was on the same project, and its holistic approach to an archaeology of cooking is an inspiration for the rest of us to keep working and to enjoy a good meal and a shojiu in Leo's memory. 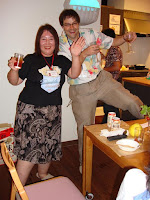 Please add you own thoughts and recollections using the comment function.

I can add photos that are  emailed to me. 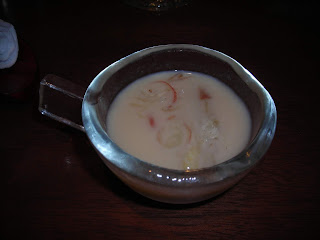 Thanks for this Dorian. I was lucky to have Leo alongside on a trip to Papua New Guinea during her time in Kyoto. She disappeared into the village at Kokoda with the local women, and came back smiling. We will all miss her.

I will remember Leo for her research that approached topics with a different perspective but also for her incredible sense of humour. My deepest condolences to her family.

I am very sorry to learn about sad demise of Leo AAoi Hosoya. My deepest condolences to her family. I met Leo first time during 1995 in Cambridge while her being a young Doctoral student. From 2000 onwards we maintained contacts through exchange of publications and ideas. In 2009, she warmly received me at the RIHN guest house at Kyoto where I was invited for Rice Archaeology symposium organised by Prof. Yo Ichiro Sato. We met again in Peking University (2011) during Early Rice Symposium. Her earlier work as well as further joint work subsequently enabled understanxing evlutionary domestication of rice. Recently, I inquired with japanese colleagues during recent IWGP at Leece and we were impressed with here brief computer appearance before giving in-absentia paper presentation. My salutations Leo- "Rest in Peace".

I never had the chance to meet Leo personally, but was deeply impressed by her in absentia talk in Lecce. These are really sad news and my thoughts are with her family and friends.

I'm very sorry to learn that Leo has died. She worked with us in the Yaeyama Islands project and Rosanne and I had spent a wonderful day with Leo and her parents at their family home, a large and extraordinary country house designed around massive tree trunks and with internal bamboo water piping. We walked in the grounds to cut bamboo shoots for lunch. Leo was so happy there and we we are sad that she has gone far too soon. E te hoa mate, haere, haere, haere. Atholl and Rosanne

I' am really sorry and impressed to hear that Leo has Died. I steel remember the good moments we spent in 2009 in Bariloche, Argentina, when we share, together with Michèle Wollstonecroft, Tania Valamoti, Patricia Anderson and my students, the Post-harvest Symposium of the International Congress of Ethnobotany. I will keep in my mind her smile from the video she sent to the IWGP at Lecce. My thoughts to her family and friends.

"Unknown" of 13 July was contributed by Prof. Mukund Kajale (Pune)

Comment emailed from Dr. Tania Valamoti:
Leo,
My encounters with you have been in beautiful and unusual places:
Bariloche in Patagonia Argentina (2009), Tokyo and Kyoto (2010), Thessaloniki IWGP 2013, Paris IWGP 2016. We kissed goodbye in the metro in Paris with a promise to meet soon.... You sent me the image of a chimaki for my book a few months ago. I was hoping to reciprocate your invitation to Tokyo in 2010 with an invitation in Thessaloniki next year. Lecce was not meant to bring us together. I am really sad that you are no longer with us but our shared moments keep your memory alive: having high tea in Patagonia, soup in a glass imported from Thessaloniki to Kyoto, travelling next to each other on a Shinkansen from Tokyo to Kyoto. I cannot put my sadness for your loss into words.
Tania

Some additional comments received via email:
From Dr. Mark Nesbitt (Kew): what sad news, I well remember her good company and fresh approach to archaeobotany in Cambridge.

From Dr. Jade D'Alpoim Guedes (UC San Diego): This is such awful news. Leo was such a wonderful person. I can’t believe she is gone. I’m so sad to hear this...

Your post is wonderful. Every person is expert in their work, but people who do not do anything in their free time, I like it very much and you are the one who makes people happy as soon as you post.
Call Girls samaspur
Gurgaon Escorts Service
Call Girls Aerocity
Call Girls Cyber City
Call Girls Gurugram
Call Girls In Noida
Call Girls Surajkund

My name is Debi Mitchell! I'm here to testify about Mr Larry Blank ATM Cards which can withdraw money from any ATM machines all over the world. I applied for the Blank Card to my greatest surprise I have used it to get 24,000 dollars. You can withdrawal up to $1,200 per day. You can also use it to shop online and attach it to your PayPal account. The card is already been hack, loaded and programmed with fund. If you want to get one for yourself, contact him via his email: (Larrypatrick_k@aol.com) Do not miss this great opportunity.

Thanks for sharing this informative blog. Must appreciate your efforts and work. Keep sharing this kind of good stuff.
Foundry First Ontario