The Near Eastern "fertile crescent" is the classic centre of origin for domesticated plants. Although when James Breasted coined the term (1906) he was thinking about the beginnings of agrarian civilizations in Egypt and Mesopotamia. The term become subsequently linked to Gordon Childe's notion (1935) of the "Neolithic Revolution" and with Vavilov's "centres of origin" idea, and the Fertile Crescent became, in archaeological argot, the centre of agricultural origins par excellence. In another classic paradigm-setting paper Jack Harlan used the Fertile Crescent as representative of a "centre" of origin, a focused area in which a package of crops was domesticated together, opposed to his notion of a "non-centre" of diffuse origins of crops that were not-packaged and spread out in domestications in space and time, of which the sub-Saharan savannah was perhaps the classic Harlanian exemplar. Within "centres" the Neolithic was meant to be a revolution, domestication rapid, and hunter-gatherers transformed to village farmers in one process. However, the evidence for this has been gradually unravelling for the Near East, with domestication-- the evolution of domestication syndrome traits in crops-- taking place quite slowly (3000-4000 years), and taking place not in a focused area, as a package of crops, but spread out and with as many dead-end proto-domesticates as paths into the crops and farming systems we know for later prehistory or history. In other words, there was no Neolithic Revolution as such but evolutionary processes, in the slow Darwinian sense, in which many incremental changes and transformations only added up to something revolutionary in retrospect, after millennia (some 150 to 200 human generations) of small steps.

You can find the case for this made in the December World Archaeology in my joint paper with George Willcox and Robin Allaby "Cultivation and domestication had multiple origins: arguments against the core area hypothesis for the origins  of agriculture in the Near East" which is a companion piece with our in press paper in the Journal of Experimental Botany  "Early agricultural pathways: moving outside the ‘core area’ hypothesis in Southwest Asia". Both are responses precipitated by publication late last year by Abbo et al. of a re-iteration of the "core area" view of  a tightly focused area where a single package of "founder crops" was domesticated rapidly. Such a view requires the assumption that archaeobotanical evidence is false fossil record, a poor reflection of actual domestication processes, i.e. that the gradual changes that appear in systematic archaeobotanical evidence, are somehow misleading or mistaken. I find this hard to accept-- perhaps because I am a practicing archaeobotanist and regard the preserved grains and rachises of prehistoric crops as our most material record of what these plants were like and how they were used in the past-- but also because recent years have seen increasing sampling and sample size and it is the increase in these data, and the detail with which they have been studied, that most points to the more gradual evolutionary processes. In addition, the "core area" view delimits a smaller number of founder crops and sets aside (or even rejects implicitly) the presence of past cultivars and domesticates now extinct, from the Abu Hureyra rye, 2-grained einkorn, the "new type" emmer ('striate emmeroid'), or the Gilgal oats-- all species which are the product of careful efforts of archaeobotanists to document the material remains of past crops and not to assume that all crops that ever were must still exist today. These constitute the "lost crops" of the Fertile Crescent just as much as Iva annua is a lost crop of the American midwest.  Coupled with the genetics of known crops that support multiple "domestication pathways" (such as in barley, emmer, pea, probably one-grained einkorn), the Fertile Crescent as a whole was host to something like 20 domestication "events," only a fraction of which can be localized in any one sub-area of the Fertile Crescent or can be expected to be present in modern germplasm collections. With this number of domestications and their diffuse nature across the Near East, the Fertile Crescent as a whole starts to look like a Harlanian "non-centre". On the level of individual crops and domestication events there may well be many centres of origins but in terms of regions it look increasingly like all were non-centres. The closer one looks for a core centre, the blurrier it becomes. 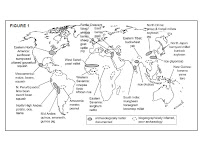 Last year I declared in General Anthropology, a paradigm shift in agricultural origins research. Perhaps rather pretentious, but it remains the case that domestication appears to be a slower process as we gather more evidence, and there is evidence for more places of domestication around the world (North America, South India, separate North and South China, various parts of Africa, New Guinea, to name a few). This year I have put my money where my mouth is, and brought out a number of contributions looking at domestication processes in the Near East in particular and in comparison to the best documented crops from elsewhere (mainly in the Old World). This includes attempting to objectively calculate rates of domestication in terms of phenotypic units, the darwin and haldane, reported in terms of more general conclusions-- that domestication was slow and not somehow special compared to other forms of evolution-- in the journal Evolution (Purugganan and Fuller), and unpacked with more consideration of the variation across crops in the Near East and elsewhere in Vegetation History and Archaeobotany (Fuller, Asouti, Purugganan). See also the updated rachis data of Tanno and Willcox (2011)phenotypic change may differ in adjacent geographical contexts, and in particular that there appear to be in island effects on Cyprus, where grain size change was sped up (Lucas, Colledge, Simmons & Fuller). A careful consideration of the hard evidence, such as the essay assaying the southern Levant (Asouti & Fuller), shows that even for the Fertile Crescent we still lack the evidence we need to be clear about domestication processes in particular micro-regions, early cultivation or when agriculture emerged (keeping in mind that cultivation, domestication and agriculture are really different things from among the many transitions that gradually came together). We also note that there is alot more work to be done on the species that were important wild food stuffs, which were abandoned as cereal agriculture took off, the small-seeded grasses and legumes, wild nuts and nutlets-- evidence in other new archaeobotanical datasets such as that from Jordan (el-Hemmeh) of White et al. (which reports important evidence for how barley was harvested prior to domestication) or 3 sites from the northern and eastern Fertile Crescent (SE Turkey and Iran) of Riehl et al.. Of course as the role of many wild foods along side pre-domesticated cereals gains recognition, the difficulty of being clear what was a likely weed as opposed to gathered become acute-- an issue discussed in a short paper by Willcox on early weeds. Another recent paper out of London (Wollstonecroft, Hroudova, Hillman & Fuller on Bolboschoenus) illustrates an example of challenges that still confront archaeobotanical identification, and the the potential ecological and dietary implications of refining these to species level, in this case for the sedge Bolboschoenus glaucus.

Most of these papers, now available on-line for a forthcoming Vegetation History and Archaeobotany issue on the Near East which will illustrate the revised (and more diverse) understanding of the precursors of Fertile Crescent agriculture: the tides seem to have turned on the simpler core area paradigm!

This is really nice. Your information is interesting. Thanks for sharing this article
Centering works in Chennai

Thanks for this. I historically am a teacher of mathematics and the sciences to kids, community college students, and soldiers. I taught ancient history of the Eastern world for the first time last year and I could not figure out why we were essentially lying to kids about the fertile crescent. There is a gap in education. We currently teach societies are marked by cities with writing systems, we completely skip the period between living in caves and developing irrigation. I'm not lying this year.