Soybean archaeobotany: multiple origins and not coincident with cereals 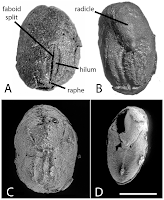 A important paper on Soybean domestication (subtitle "Does size matter?") was published last month in PLOSone by G-A. Lee, Gary Crawford and colleagues. This reports details on the morphometrics of more than 900 archaeological soybeans across 22 sites in (northern) China, South Korea and Japan, including 7 directly dated by AMS. This provides the first really good archaeological dataset for making inferences about soybean domestication, and includes a summary of the soybean metrics from Wangchenggang published in a Chinese monograph in 2007 by Zhao Zhijun (and in more detail his 2010 book collection) , previously suggested to indicate some size increase by the Longshan period (i.e. 2500-1900 BC). The data reported here suggests large, truly domesticated soybeans present in middle Jomon Japan Shimoyakebe (near Tokyo), from the Third Millennium BC. These are significantly larger than those from the Yellow River valley oif similar age, the Longshan period, which are also probably enlarged by selection under cultivation (at least the population from Wangchengang appear enlarged while some other Longshan samples still fall in the wild type range). In Korea a measured population form the Middle Chulmun is perhaps marginally enlarged while those of the later Mumum had clearly undergone selection for size increase. The overall impression that selection for seed size increase in soybeans was a protracted process and one that was uneven in different regions, and it may be that in some areas wild population continued to be exploited or proximity of wild populations and early cultivation methods did not lends themselves to selecting for larger seed size. This then complements data emerging from several crops for a protracted process of evolution of domestication traits (see previous, for example my articles in Annals of Botany or Evolution, and for a discussion of protracted domestication processes in the New World tropics see the recent Current Anthropology by Piperno). It also strongly points to a Jomon domestication independent from that in northern China, and one in which seed size evolved more quickly. While genetic publications present a cacophony of single versus multiple domestication models for the soybean, those favouring a single genetic origin tend to rely on genome-wide-markers and simple tree-building, or bottleneck models, e.g. Guo et al 2010 (which has been shown to be problematic, e.g. by Allaby et al. 2008 and 2010), and those favouring multiple origins, including a separate Japanese origin seem more realistic and have support from chloroplast polymorphisms, e.g. Abe et al 2002; Xu et al 2002).
For those looking for generalizations about agricultural origins, East Asian soybean has long been taken as an east Asian equivalent of the pulses and beans of Near Eastern, as the legume component of cereal-legume package of early agriculture. Proponents of a single centered origin of agriculture in the northern Fertile Crescent of the Near East, for example Abbo et al (2010), point to the overlap zone of wild wheats, barley, lentil, pea, chickpea, as the core area of domestication in part on the assumption that this package of crops must have originated together. I am among those who disagree (e.g. in World Archaeology or J. of Experimental Botany), and see this as a package that came together piecemeal and gradually. In East Asia, there is now systematic archaeobotany that points to no initial linkage between soybean and early cultivated millets of the north nor rice of the Yangtze. Soybean were a later addition, gathered wild by some and cultivated by some some, perhaps not much earlier than the third millennium BC.
See also this news piece from the University of Oregon. See also the excellent overview on Korean archaeobotany by Lee in a recent Current Anthropology, which also has reviews on Japan by Crawford, and China by Zhao Zhijun.
at December 06, 2011