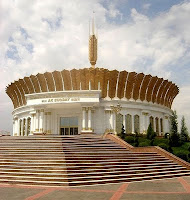 It was hard to resist the image at right, of a museum dedicated to wheat, designed with an ear on top. This web site, of an old press release (July 2005), was just brought my attention by a colleague. It claims to celebrate "the earliest known wheat culture" (well that was not in Turkmenistan) the Anau culture (which is pretty late in the Neolithic), and the archaeology of Pumpelly (turn of the last century), who is credited with the first explanatory model of agricultural origins that attributed agricultural origins to climatic change. Good to have that immortalized somewhere. Later announcements indicate that this museum was also to become a national germplasm bank for wheat, which seems a good thing.
at March 08, 2012

Can't see the image you hotlinked to, alas.

The image disappeared from the original website too. I have revised this with photo I found.