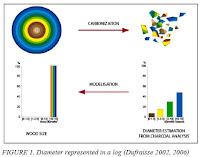 It recently came to my attention that last year's meet of archaeological charcoal analysts (mainly European), has a nice set of extended abstracts (or short papers) published freely on line as a special number of the Spanish periodical Saguntum. The wood charcoal papers are here, amongst which are number of interesting study, including a Irish study on quantification issues attempting to identify saturation points, the fragment count at which taxa diversity in a sample stops increasing: for Ireland this appear to be around 20 taxa. A French study develops the Dufraisse model for using charcoal ring diameters to model the size of fire wood being collected as a way into human behavioral patterns in wood exploitation (image at left). Eleni Asouti explores the wood charcoal from Catal Hoyuk which fits neither with a straight forward model of climate-driven change in taxa or anthropogenic over-exploitation models. Meanwhile a burnt down building from PPNB Qarassa in Syria provides a glimpse into the construction material used in early villages in the Levant. You can also find a small, but pioneering study of charcoal from Chinese flotation samples taken in a region survey, an analysis of some Yanghao-Longshan charcoal from the Ying valley in Eastern Henan-- which provides evidence for the dominance of oak forests, oak as fuel source, despite a seed record that is dominated by cultivated millets, lacking evidence for acorn consumption. Although we lack good earlier archaeobotanical evidence from this particularly region, it does still suggest a contrast with the earlier predominance of acorns elsewhere in China. By the Yangshao period agriculture had pretty much taken over and wild foods were in decline, although the Yangsaho period still shows a higher range of wild fruits than we find in subsequent periods in the Ying (see Zhang et al in J. Arch Sci 2010).
And there are many other charcoal studies there I have yet to explore.
at March 16, 2012

A selection of these short papers have been now published in an extended version: https://www.sapac.es/charcoal/saguntum_e13.php

Great information sir, if you want buy wood charcoal you can visit : http://www.woodcharcoalbbq.com