A new article, out this week in Geophysical Research Letters, "Holocene aridification of India", by, Ponton, Giosan, an others, presents important new, and quite high resolution, data on past monsoon dynamics and vegetation of peninsular India spanning the whole Holocene. This research, lead by researchers from the Woods Hole Oceanographic Institute, analyzed evidence from a Bay of Bengal sediment core, which captures discharges from the large Godavari river system. The core data comes from carbon isotopes of leaf waxes, reflecting the amount of arid-adapted/ savannah vegetation in the Godavari catchment, and oxygen isotopes from a marine microfossil that record salinity. This points to a general aridification trend over the course of the middle and late Holocene, supporting what we already would infer from pollen data in Rajasthan or monsoon proxies in the Arabian Sea, but this time providing more direct evidence from South India. My own involvement in this work came in the form of trying to think about how this might be correlated with archaeological evidence for settlement, agriculture and population in South India-- where the archaeological record suggests increasing sedentism, population and agriculture in response to, or despite, aridification, a contrast from the Indus region for example where the long-term trend of population depletion as aridification proceeded. This suggests long term cultural adapatation processes to aridification in peninsular Indian agricultural practices. 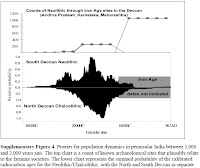 To quote from part of our conclusion: "The significant aridification recorded after ca. 4,000 years ago may have spurred the widespread adoption of sedentary agriculture in central and south India capable of providing surplus food in a less secure hydroclimate. Archaeological site numbers and the summed probability distributions of calibrated radiocarbon dates from archaeological sites, which serve as proxies of agricultural population, increase markedly after 4,000 BP in peninsular India [discussed in detail in the electronic supplementary text]...In contrast, the same process of drying elicited the opposite response in the already arid northwestern region of the subcontinent along the Indus River. From 3,900 to 3,200 years BP, the urban Harappan civilization entered a phase of protracted collapse. Late Harrapan rural settlements became instead more numerous in the rainier regions at the foothills of the Himalaya and in the Ganges watershed."  Most of the archaeological information is summarized in the electronic supplement, Section 4., and included an attempt to sum Neolithic/Chalcolithihc radiocarbon dates (as limited as they are) and to tally known site numbers through the Iron Age.
This work complements recent sedimentary studies of the Indus river system, such as the Clift et al Geology paper, blogged earlier.
at February 14, 2012