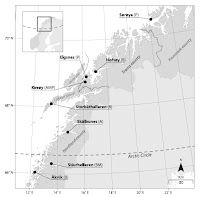 We usually think about the spread of Neolithic agriculture as an inevitable, progressive march, as well-adapted cereal systems, for example Wheat and Barley from Near East, are extended along favoured soils and river valleys, for example along Europe's Danube. While this is our standard wave-of-advance model, and it may have much going for it for middle latitudes, we often pay less heed to the limits of agriculture, and past attempts to push those limits. A new study on the introduction of agriculture to northern Norway provides a nice example. Per  Sjögren and Johan E. Arntzen report in Vegetation History and archaeobotany the limited macro-remains evidence, pollen evidence and some settlement data on the earliest agriculture on Kveoy Island, at nearly 69 degrees North. Here agriculture was rather more marginal. There is doubtfully any agriculture before about 1000 BC, but then there is a Late Bronze Age establishment of fields. The seed record suggests mainly barley, but surprisingly a little bit of wheat (emmer?) also appears to be present. Like the Early Neolithic emmer in Britain (including Scotland), this tends to hint at some cold adapted landraces in early prehistory that we would be hard pressed to find in the relict emmer populations of today (in hot Mediterranean climates, Ethiopia, South India, etc.). This agriculture however may well have failed and there is a suggested hiatus in the last centuries BC/early AD, before a Late Roman Iron Age re-establishment of farming. This may be an extreme example, but I suspect as we look we will find more and more regions in which farming was given up, whether due to local climate swings or simply to choosing something less marginal.
at February 06, 2012